An interview with Romy Lagüe and Samuel Legault of our print magazine art.icle

Romy Lagüe is a fashion design student. Samuel Legault is a photographer. Together, they make an artistic couple connected by their mutual love and respect for each other’s passion and talent. Intrigued not only by their relationship dynamic, but also by their individual approach to art, we decided to spend an afternoon in their company. So, we joined them for a stroll in the Old Port of Montreal on a windy afternoon of August.
‍
Dressed in her oversized Versace shirt, large orange pants suit and white, pink sole MM6, Romy was embodying her go-to silhouette: big sleeves, loose-fitting pants and chunky sneakers. “I like being cozy and wearing something that corresponds with my mood”. This desire to portray her emotions happens to also find itself in her principal ways of getting inspired; something she has been struggling with for the past few months, she confesses. “I am a true perfectionist and I try to get away from what has already been done to come up with ideas that are intimate to who I am as a creator, which can be a challenge”. When talking about her creative process, she indicates that she learned the importance of not basing herself on other people’s creations. “In this case, you have to look closer at your interests in other fields and dig deeper to find ideas, not only in clothing”.

This is why in order to find inspiration, Romy often turns herself to architecture and nature, at times by looking at pictures she took on her travels abroad. Her love for architectural forms definitely stands out in her collection through the styles and textiles she selected, especially with the sharper and longer sleeves, as well as the asymmetrical skirt, among other pieces. “I tried to incorporate into my garment the contrasting parts of our city and the juxtaposition of the ancient Old Port with the more modern parts of Montreal”.  Sounds and feelings are also at the core of Romy’s soul-searching creative process. She often digs deeper into her moods and thoughts of the moment, trying to materialize them into pieces depicting her introspection.
‍
Alexia: What are your go-to textiles?
‍
Romy: I would say satin and knit. I love wool too, but for now, I do not master the techniques required to play with it. However, it is definitely something I want to learn. My goal is to mix different types of textiles to create something different. The challenge with textiles is that the fabrics you combine must be in perfect symbiosis. If you use satin with something made of a heavier fibre, the garment will not fall properly and will fail to adopt a flattering silhouette, so this is a very important aspect to consider.
Romy’s perfectionist side is a part of her character she is trying to soothe as she goes. While testing out different things, she is learning that making mistakes is inherently part of the process. “If the end result is not perfect, I have this habit of telling myself it is not worth trying. I am still working on going past that mindset and letting myself fully experiment”. Romy wants to push her creativity to its maximum capacity and wishes to be defined as someone who can perform in all types of art. Right now, both the drawing and the sewing pattern of her next fashion project are done. Inspired by the recent isolation, this new piece will represent the impediment of going outside and its impact on mental health. 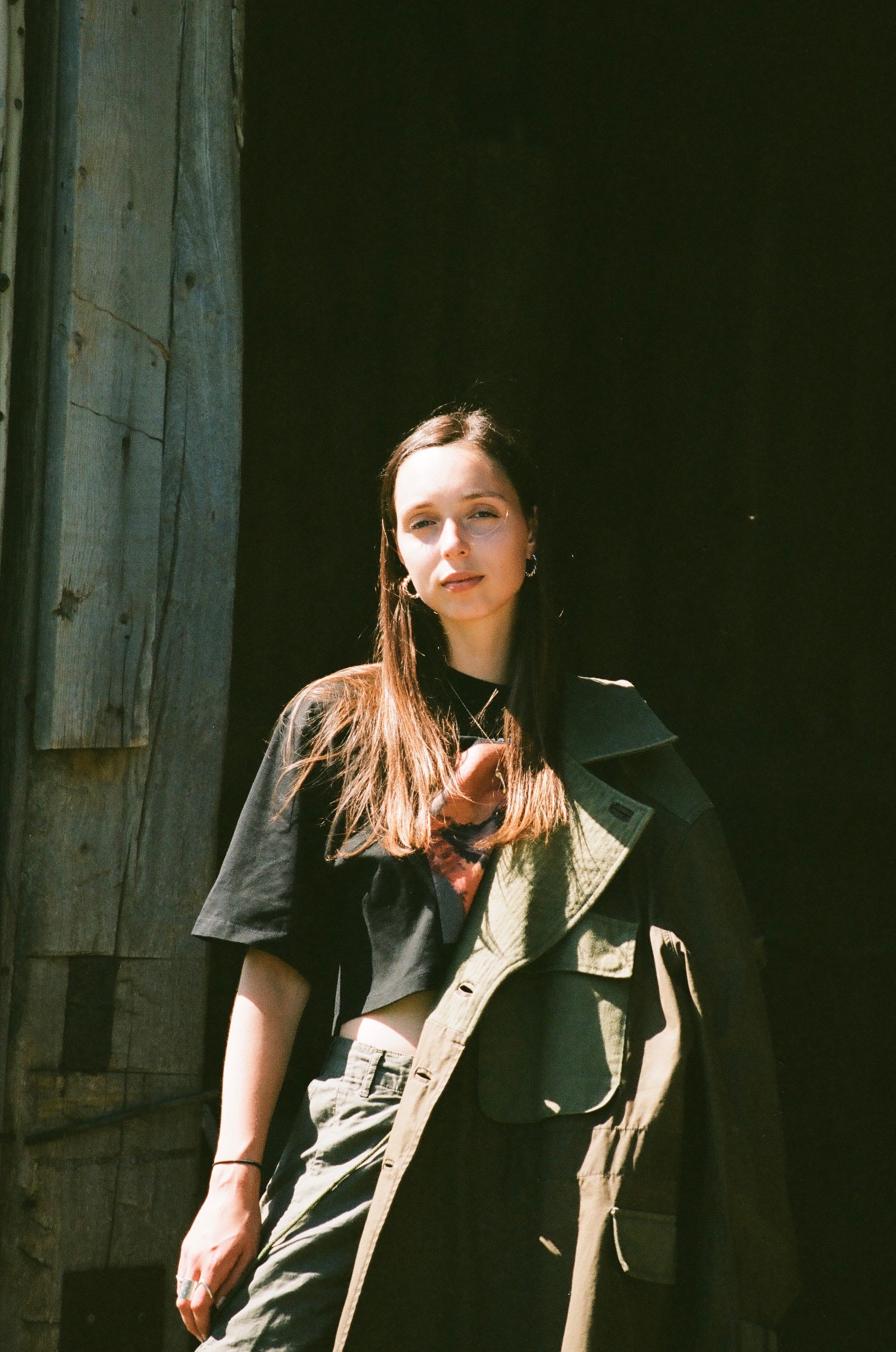 As for Samuel, his debut in photography coincides with his first ever trip to Japan, a very impactful travelling experience for him and his friend. Indeed, from a very young age, Samuel was seized with a particular interest and passion for the Japanese culture, history and art, making it a hobby of his to acquire knowledge in those fields. “One of my friends once told me that if past lives exist, I was probably Japanese in one of them”, he says jokingly. Nonetheless, he describes seeing the country as being “a lighthouse calling him from afar” since as young as he can remember, which explains his desire of diving in that unknown-yet known world for one month. In preparation for this very anticipated trip, he happened to find an old camera in his high school belongings and decided to learn everything he needed to know in hopes of being able to take satisfying pictures during his stay. With that objective in mind, he approached one of his colleagues at the time, also a professional photographer, who taught him all of the essentials. From that point on, what was left for him to do was practice. Every time he went out the door, he would take his camera with him, even at school, ready to capture what would catch his eye. Samuel states that his trip to Japan is really what anchored photography as a passion for him and up to now, it is fair to say that he has had the time to master his instrument.

Samuel: At that time and still today, I love to capture present moments. During my trip to Japan, I was not yet skilled enough to experiment with portraits, since it requires high-end equipment I did not have. Also, oftentimes, asking someone’s consent to take a picture of an action they’ve already completed removes its initial static effect, which was actually the essence of the photography. That is why while in Japan, I took pictures from afar, a lot of architectural figures and pedestrians from a higher point of view.
‍
As an introvert, detaining the right to take pictures of people without having to ask for their permission is a big factor in Samuel’s choices of destination when traveling. The fact that Japan was one of those countries made it easier for him to explore the various styles of pictures he was eager to try, him being particularly interested in fashion photography. He notes that the contrasts between Canadian and Japanese fashion were especially noticeable through the divergent garments’ silhouettes.

Samuel: Some people would wear pants that were three times their size, others could wear the skinniest bottoms you have ever seen. Contrasts were everywhere, the abundance of style variations was impressive. I even saw a whole family wearing matching pairs of shoes. Unlike here, there are no dress codes for particular aspects of life, such as going to work. People will just dress as they please, be it a 70s outfit, a traditional Japanese one, or even a whole cowboy inspired look. I have seen it all. 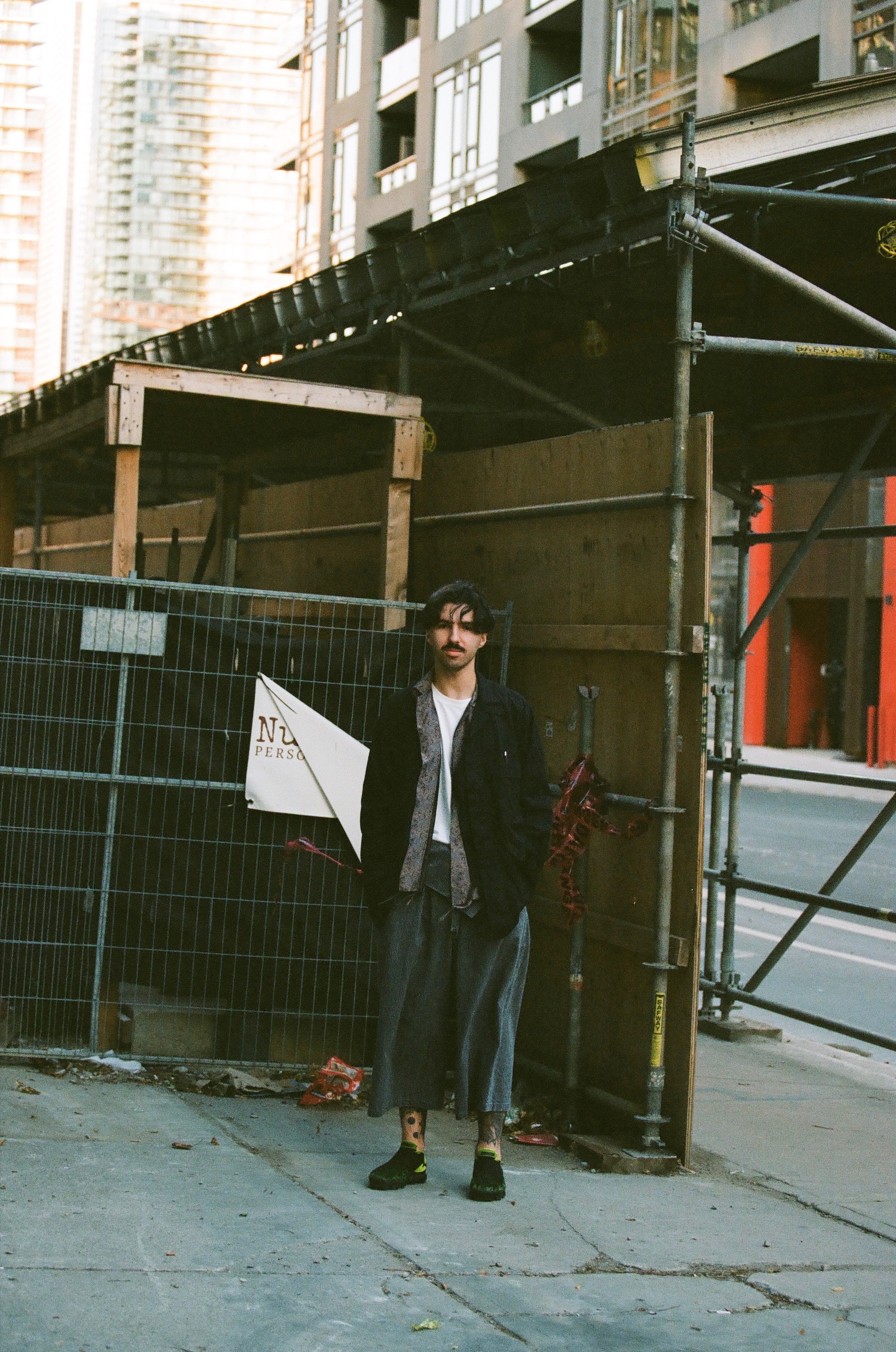 ‍The endless combination possibilities only made him want to explore fashion photography even more. As his interest in the matter blossomed, he started discovering many artists who do fashion photography for a living, which contributed to his motivation in pursuing that direction. Upon returning from this cultural immersion, Samuel had collected over 895 photographs, but what surprised him the most were the instant memories every picture would take him back to: a place, a street, or even a specific conversation. He then came to realize the power of photography. Beyond a captured moment, he perceived a photograph as a storyteller. Although he continued to take pictures once back home, Samuel considers that his passion took a serious turn about two years ago. “That is really when I started to put my heart to the task. I bought high quality equipment and made a portfolio with my best shots”. Currently studying anthropology in university, Samuel’s goal is to combine his two passions, photography and fashion, and incorporate them into the understanding of the Japanese culture. As of now, he is thinking of publishing a photography book that would convey his personal approach to the medium and in which he plans on adding some writing. “A photograph is a visual representation of a message. I think it misses the words of the one behind the lens to fully comprehend it”, he claims.
‍
But how does one start photography? is a question we asked ourselves and, therefore, turned to Samuel for an answer. Now seated at a table surrounded by loud, lumino therapeutic swings, we get to that discussion.
‍
Alexia: Let’s say I want to take a photograph of a building, what are some basics I should know?
‍
Samuel:  It is very subjective because as time goes by, you start to understand the colours you prefer the most and how you like to bring them out. It is really all a matter of what you want to show. Personally, whenever I take a picture of a building, I particularly like the contrasts of materials, like the juxtaposition of distinct colours of bricks. I also like sequentials. For example, I would do a series of windows in which one of them has something specific in it. The  emphasis it creates makes you understand the entire story told by the subject. Other times, I capture street corners because for some reason, I love architectural geometry.
This sudden interest in geometry is very ironic for Samuel, him who had never been very fond of mathematics in school. Yet, the world of photography paved the way for him to a lot of new and unexpected attentiveness in subjects he always thought he did not enjoy. “I hate cars, but somehow love taking close-up car photographs, be it an accent or a detail like a broken mirror or a series of white cars of which a red one stands out”. Samuel adds: “Photography has a vast range of possibilities. It comes down to what you like to see”. He compares it to clothing. “You can appreciate a piece of clothing because of its colour, while someone else will be attracted to it because of its textile. Photography is similar in that sense. You will interpret a subject in your own way because of one of its aspects. Eventually, you find your route and focus your eye on certain things more than others”. Samuel tells us he has even already waited about 45 minutes for a person to reach a specific point between a shadow and sunlight effect to take the exact shot he had imagined in his head. He also mentions not finding editing essential and being mostly content with the original result of his photographs. “Once I’ve taken a picture, I like telling myself that the product I’ve created is there and I will not retouch it”. When on the look for inspiration, Samuels says he submerges himself in all kinds of visuals. He particularly likes to rekindle his inner child by looking at his favorite comics and watching animes, but also finds fashion very uplifting, especially knit clothing.
‍
After talking to the two of them about their personal path, it became clear to us that Romy and Samuel come together naturally in many ways. United by their artistic approaches and visions, their relationship inspires them both to thrive as they continuously motivate the other to achieve their goals. “Seeing how dedicated and passionate your significant other is makes you want to push yourself too”, Romy says. “To support oneself artistically really helps, especially when your parents don’t necessarily understand or approve of what you do. She was the first one to tell me I should focus on my contracts.”, Samuel adds. On that note, the couple, closely followed by our duo, wandered a bit more around the area before finally going our separate ways. 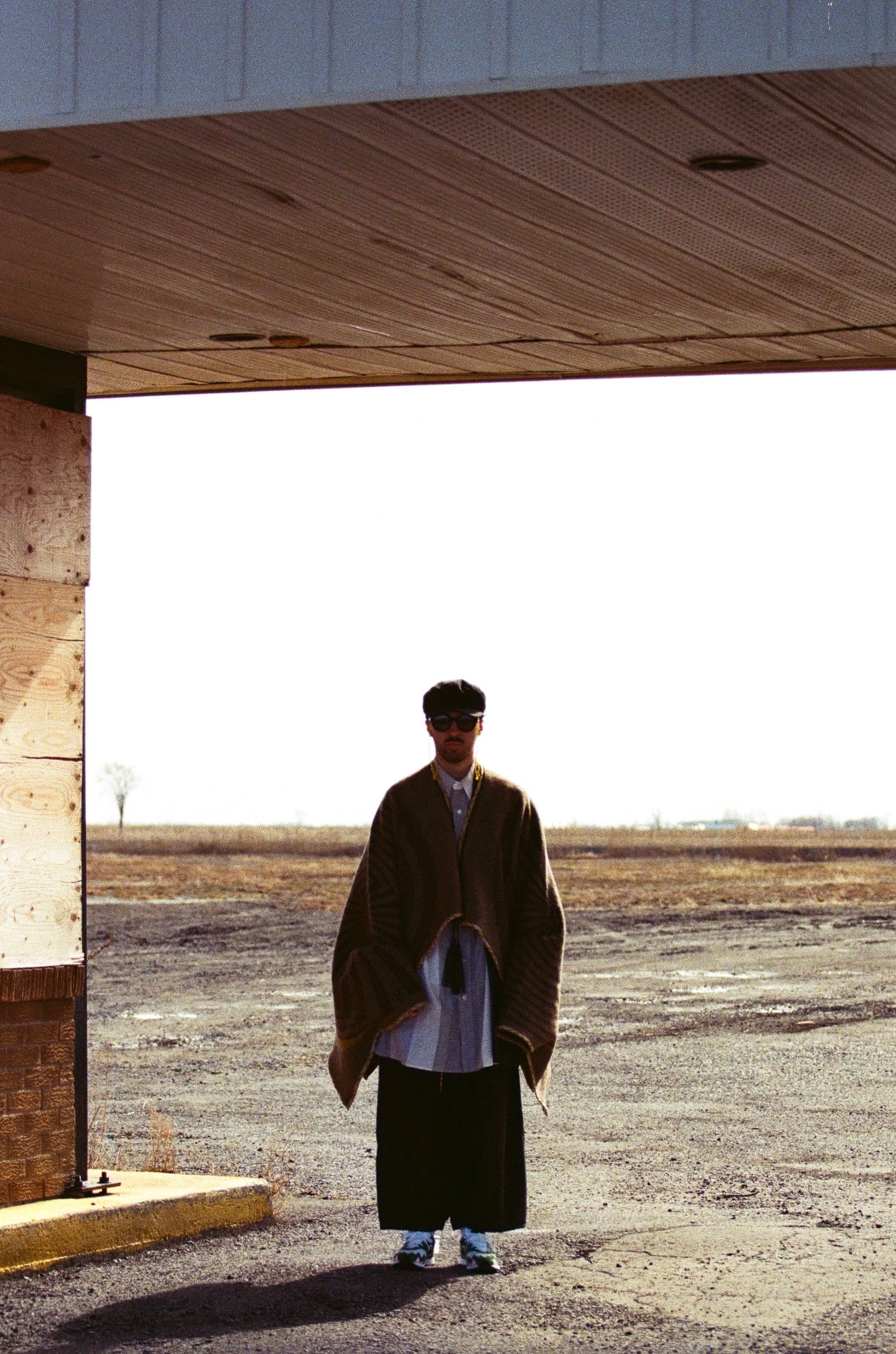 All images were provided to us by Romy and Sam.
© 2020 Musée Nomade ConnectArt