FROM MONTREAL TO MAISON MARGIELA

An Interview with François Picard, a young creative working at Maison Margiela

Without looking back, François Picard left his native Montreal to pursue the ambitious vision he had for his future. From Montreal to Antwerp, and now based in Paris, he keeps working towards transposing his dream into a tangible reality. As one of the leading capitals in the fashion industry, Paris paved the way for him to seize the opportunity to make a name for himself. He recently found his fit under the roof of Maison Margiela, one of the biggest fashion houses in the world, known for its anti-fashion approach.
‍
Driven by the rhythms of punk and new-wave genres, François came to realize it was possible to merge his passion for music with his love for fashion. Aiming to create authentic time-travelling, sustainable pieces for generations to come, he finds inspiration in the avant-garde of the 90s. A period defined by simple pieces that nowadays might seem of little depth or complexity, but in the past were considered as revolutionary. His vision is all about simplicity and standing out without “dressing-up”. As our society’s consumerist habits evolve, François believes that people are now looking for more accessible creations that can be easily understood. Finding ways to “fit in” while standing out and breaking down barriers between high-end and ready-to-wear are concepts he is interested in exploring.
‍
François: When I was younger,  my father listened to a lot of music. I was constantly exposed to different sounds and genres. One day I saw a collection by Raf Simons who had used the Joy Division and New Order albums which made me realize that music is maybe a fashion benchmark. There is also everything design related, everything that has already been done in fashion before is without a doubt a great source of inspiration. Obviously, while trying to remain authentic, the past can help to navigate one's flow of thoughts. You really have to find what you are capable of doing differently because that's how new creators and new designers make a name for themselves. Pinpointing what defines and differentiates you, exploiting that to the maximum, and then determining if it works or it doesn’t.
‍
As an emerging creator aiming to start a career in the fashion industry, crossing the Atlantic Ocean towards the European continent seemed to be the next logical step in his career. In the fall of 2019, he left North America to establish himself in Antwerp, Belgium. A fast-paced creative hub which houses the offices of well-known designers such as Ann Demeulemeester, Dries Van Noten, Haider Ackermann, and Raf Simons.
‍
François: Antwerp is considered a very fashionable city because of the Royal Academy of Fine Arts. An institution known for its high level of difficulty and the incredible students who have emerged from it like Demna Gvasalia from Balenciaga and even Martin Margiela. While being in the same city as the Academy, I realized that fashion houses will always favour the school's students. The graduates from the Academy are preferred because of their background, which is often defined as ideal among the industry. At this point, I hit a wall, and I told myself that I was going to sort things out and start looking for any type of experience. However, the second obstacle that I faced was the linguistic barrier since I don’t speak Flemish.
‍
Despite the challenges, François defined his stay in Antwerp as an opportunity for personal growth. He was confined in an apartment with no television, more often than not, no 3G or any access to the internet. He used this off-line disconnection moment to reconnect with his inner-self. Reading and listening to music were his main occupations at that time. These two months and a half were mainly dedicated to thinking about his next step and what he wanted to achieve. Similar to a rite of passage, he defined this episode of his European journey as constructive but extremely difficult. Returning to Canada was an unthinkable option and, luckily, an opportunity arose for him in France. That is why in December 2019 he began a new chapter in Paris.
‍
François: I arrived in Paris in December and started working for Acne Studios. Of course, I did have expectations which, as time went by, started to seem slightly unrealistic in terms of the pace at which I was planning to achieve my goals. There is no significant difference between working in sales in Montreal and Paris. Nevertheless, one aspect that differs from one place to the other is that you won’t find too many students working in retail. Here, it really is a distinct career path and the employees in the field are older than me. Coming from North America, this is not the perception that I had about the profession. For me, the selling universe is more of a door opening to future opportunities, such as working in the ateliers.
‍
Always looking forward and planning his next step, François is constantly setting new objectives for himself. That is why after a short, yet valuable, experience at Acne Studios, he started working at Maison Margiela, an experience he cherishes due to his love for the house. 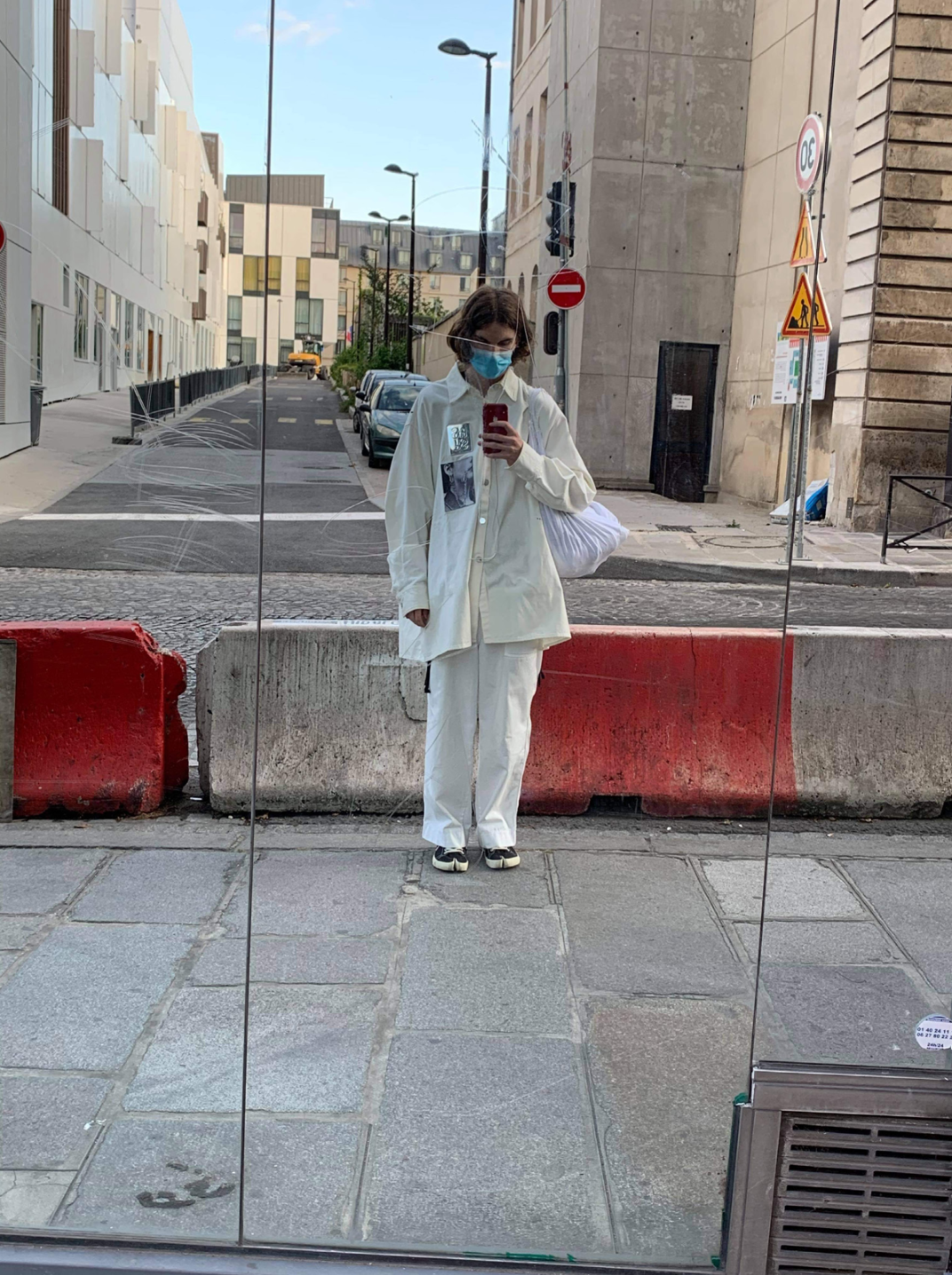 His personal connection with Margiela is rooted in the core principles of the house. Marigiela is not seeking to please everyone, it sticks to its origins. Even though it was not necessarily easily accepted at its inception, they still continued to stick to their DNA.
‍
François: Maison Margiela is very anti-fashion while being fashionable, and I think that's why people love it. It all started when Martin Margiela introduced himself into the world of Parisian fashion as someone who had limited means and who said “I think that there is a way to do fashion differently”. He established a continuum of creation aiming to make fashion which “disturbed” the masses and diverged from the traditional established heritage brands. With Maison Margiela there is this idea that it’s a house more oriented towards people in the creative realm; the pieces and messages they convey attract many artists, musicians, and poets. Margiela's core clientele consists of  those who are looking for something very authentic and different without necessarily being super provocative. I am thinking of the Tabi boot, which is the icon of Maison Margiela. It is something which will provoke some people, but that as soon as you explain that it is a Japanese-inspired boot, a working shoe, their point of view changes and they realize that it may not be that strange after all. John Galliano, the current Artistic Director at Maison Margiela,  is an impressive couturier with a different vision. The house has changed a lot since he started and it is very interesting to see where it's headed in a world that is very much based on trends - what is the next piece that is going to have everyone talking?
‍
François: The working atmosphere at Margiela is surprisingly very warm, which is something I found quite unexpected given the fact that it is a luxury house. I honestly did not expect it to be so friendly and casual. Despite the comfort of my in-store position, I always made it clear that my goal is not to pursue a sales consultant career. People in Human Resources and my managers are well aware of this. In this industry, it's imperative to clarify your goals with your superiors and not be afraid to externalize your expectations to avoid stagnating in a position where you cannot exploit your potential to the fullest.
‍
But now let’s dive into the core of François’ projects and personal creative goals.
‍
François: I am currently at the phase of sketching and drawing, but I have not started the sewing process because I feel that this is not where I am yet. I have realized that the more I am immersed in the industry, the more my idea and comprehension of garment changes radically. For now, everything is very conceptual in the sense that I want to express many ideas, but still have to see how that materializes into a garment. I am definitely not a John Galliano nor an Alexander McQueen, designers known for collections that are usually “the elephant in the room”. Quite often, to make sense of their work, you need to go back and read the show-notes to understand where they sourced inspiration to come up with such complex and in-depth collections.
‍
Haute-couture is not a field he is interested in. François’ vision is to create pieces deriving from relatable references to which millenials and Gen Z could identify without necessarily having to research for hours. He is looking for ways to rethink our day-to-day basics into creative yet simple, and uncluttered garments. Experimenting with sewing and researching about the sustainability of fabrics are his projects for the upcoming months.
‍
François: I think that in 2020 sustainability is a central theme of the industry. I am very happy because Margiela is definitely making an effort in this field. It shows clients that a luxury house can be sustainable and that this doesn't remove the luxury or prestigious side of it. This can be seen via a lot of pieces this season and especially through a patch on the inside and outside of the garment, which explains where it comes from and that the textiles are sustainable or recycled. It depicts the evolving mentalities and the openness not only from the creator’s side, but also from buyer’s. If we make efforts in the field, it is because there is an interest and a clientele for that. Sustainability will be more and more important with the years to come. I think that COVID-19 made people realize that the way the massive fashion industry functions is quite obsolete. It doesn’t make any sense to come up with 4 to 6 collections per year. Everything comes and goes way too fast and it doesn't even follow the seasons anymore (i.e. in the middle of summer now August / September, we have winter pieces on the floor, which doesn't make any sense). In terms of personal projects, I  would love to work with recycled materials or ones that are more environmentally and ethically conscious. It is really time to do something with this overflow of textiles. Both young and established designers have a role to play in this fight, but it is also the role of customers to be informed and to redirect themselves towards fair and sustainable places. 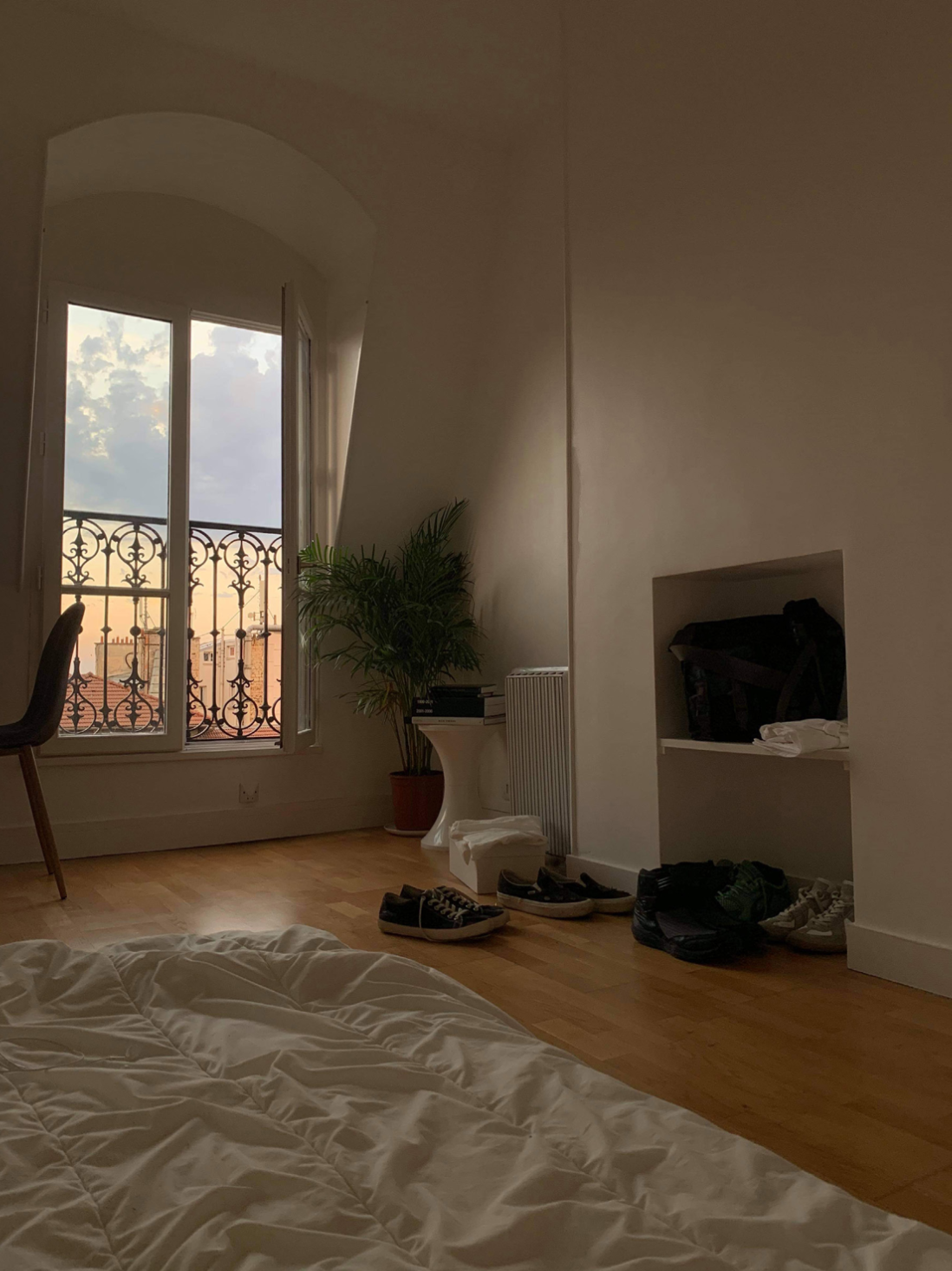 ‍Despite being immersed in one of the fashion capitals, François never forgets Montreal, where he made his first steps into the industry at SSENSE. He believes that it is possible to transform Montreal into a creative hub if young designers start to establish themselves here and if more boutiques open their doors in the city.  According to him, we must stop associating Paris with success in fashion. François strongly believes that it can be done anywhere, but for the moment there is no denial, a lot of entry points are Paris based, and cannot be found elsewhere. That is why many young creatives aiming to succeed in this competitive industry prefer to pack their bags and transition to Paris.
‍
François: I would definitely like to come back to Montreal. Paris with all its qualities and defaults remains very far from the belonging feeling that I have with Quebec and Montreal. Being in Paris made me realize that I hope to be able to return home and bring back everything that I have learned abroad. I think that we have to give ourselves the time to gain visibility and eventually, I believe that we will be able to launch a strong creative fashion community that will have international outreach.

All images were provided to us by François.
© 2020 Musée Nomade ConnectArt