ON THE L.V. FOUNDATION

As art.icle welcomes its newest member of the content creation team for our digital blog and print magazine, we present this first essay by Émile for ConnectArt about the Louis Vuitton Foundation located in Bois-de-Boulogne in Paris.

The Louis Vuitton Foundation is situated on the outskirts of the Bois-de-Boulogne in Paris. This museum is an indispensable attraction if only for the sight of its building, one of Frank Gehry’s masterpieces. Its location plays an interesting part in the visitors’ experiences; going through these woods of one of Paris’ famous parks, even by car, settles the mind making it more receptive to what it’ll behold next. The building itself will strike the beholders’ minds. Wreathed in gigantic floating structures of glass that overlap one another, the building appears to be voluminous and airy. It is quite imposing in size but clashes with the park’s scenery no more than big clouds clash with a mountain top. The clear glass and the gentle curves it is set in gives the visitors a sense of stepping into a giant crystalline reef or under thin veils settling after a gentle gush of wind swept them from the ground.
‍ 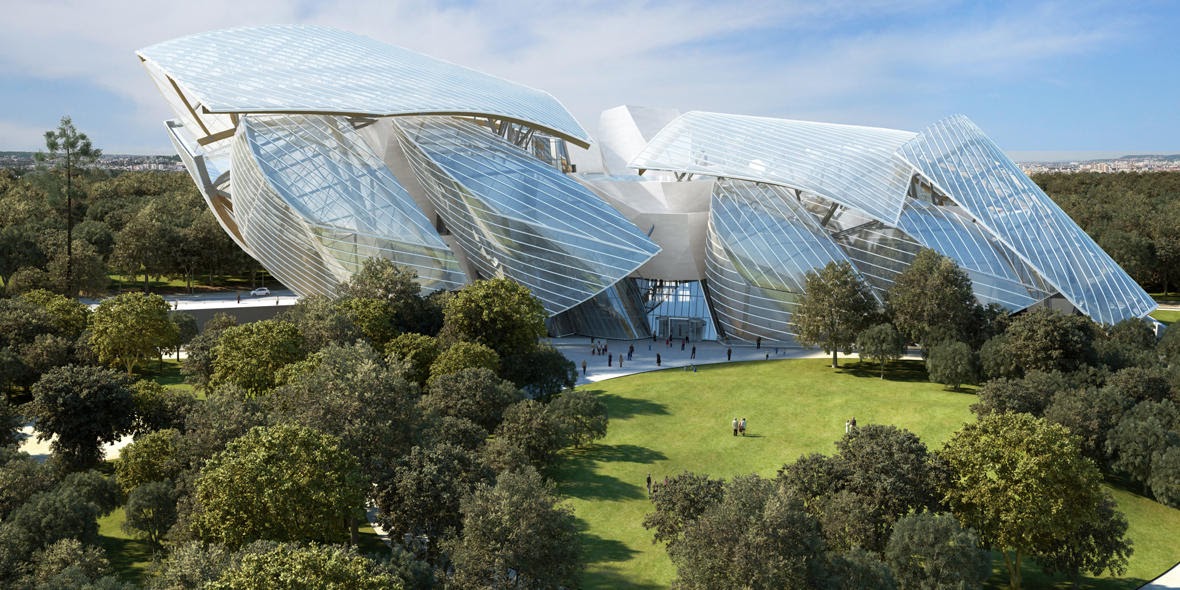 Inside, the galleries of the Foundation do not betray the ethereal feeling of its external appearance. By the count of eleven, all are spacious and present a fascinating collection of modern and contemporary art no older than the second half of the XXth century. With their brilliant disposition, the galleries enhance the experience of the visitors by regulating the pace of their stroll. The volume of the rooms give a breath of space to the people occupying it and allows them to disperse rather than aggregate and hinder someone else’s experience. Plus, the galleries are placed on many levels of the building; the periodic climb to the upper-level allows the mind a little rest, preparing it for the wonders to come.
‍
Now, as for the art they hold, the majority of the works presented are paintings and sculptures. Yet other, less conventional mediums such as holograms, installations, videos, sound and music tracks are a sizable portion of the exhibit. There is no telling what to expect from a gallery to another. At one time, one may observe the details of a stuffed race horse hung by the ceiling in a saddened posture  (La Ballata di Trotski, Maurizio Cattelan, 1996). The contemplation of which leaves its audience in a melancholic perplexity. 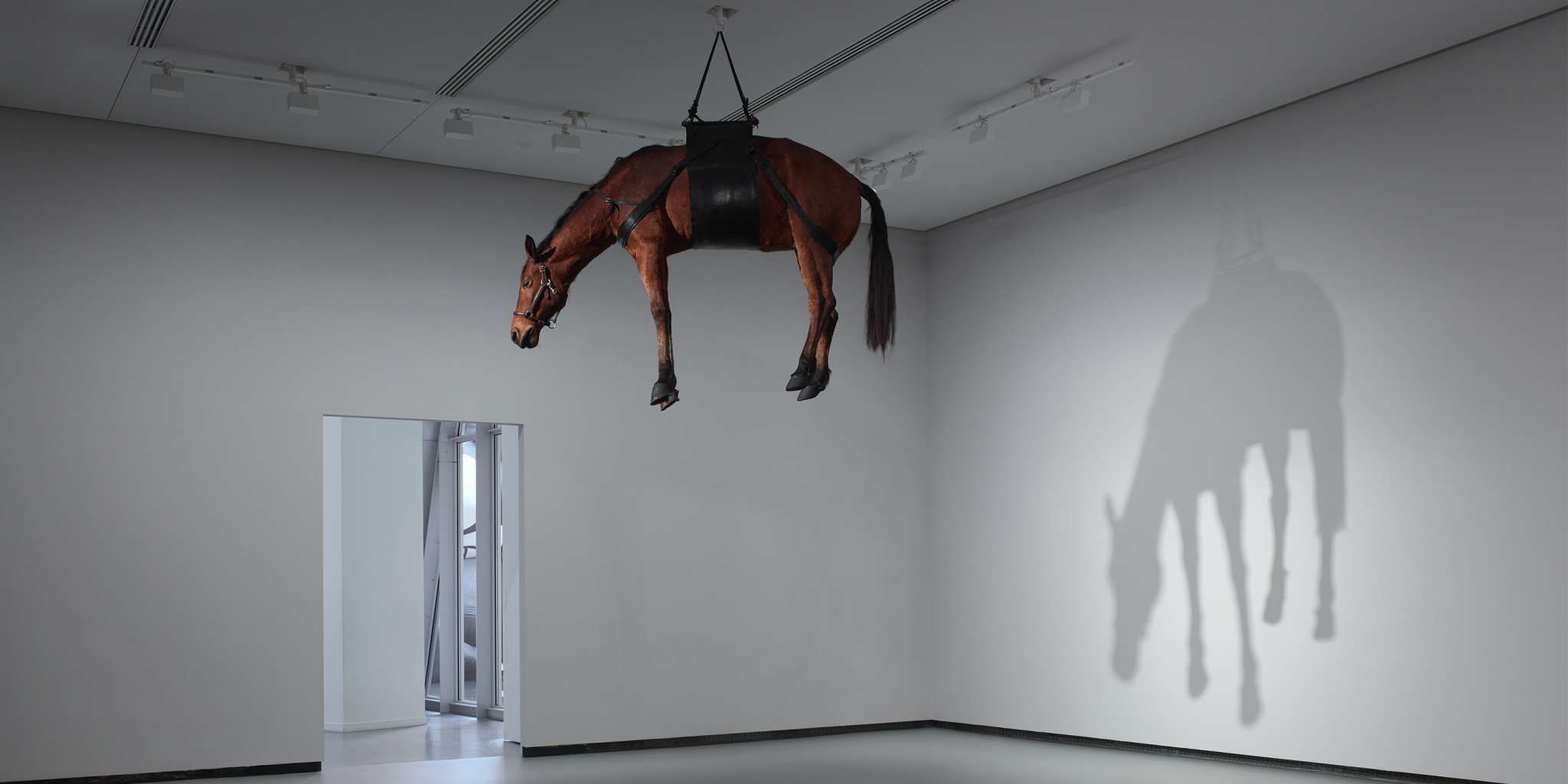 At another time, a short film set in a dystopic setting will show footage of a monkey wearing a mask inspired by the Japanese noh theatre tradition (Untitled (Human Mask) Pierre Huyghe, 2014). Presented in an ominously dark room, the viewer’s attention has no option but to be riveted to the projection. In this intimate room rid of any distractions, the resemblance between the monkey’s actions and human behaviour is striking; it leaves one confused and makes one question the very boundaries of humanity. 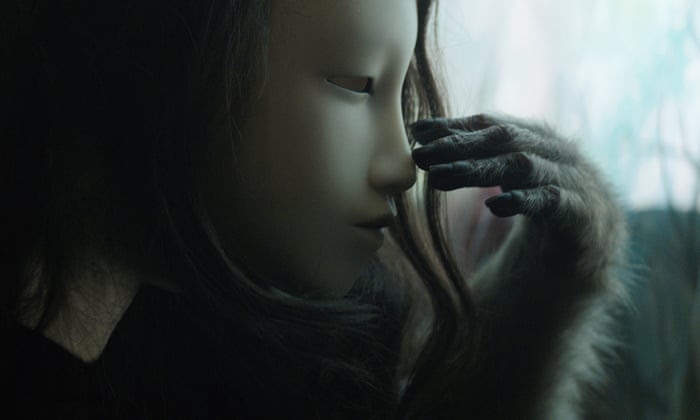 The Foundation’s curators evidently had a mind to build a thought-provoking collection by giving it an engaged stance. Of course, not all artworks found within these glass walls are as troubling as those described above. Beauty and grace are frequent encounters when visiting the L.V. Foundation starting with Frank Gehry’s masterpiece. But it is the underlying messages behind the collection that reinforces its contemporary relevance. Younger generations have acquired a taste for art that expresses social engagement. Denouncing the various injustices that plague our society, describing a generational mal de vivre or calling out attention to social issues that have been denied a voice until now is a commitment many contemporary artists make. A cultural institution that presents contemporary art would be remiss if it did not convey this effort.
‍
Another way this museum carries the contemporary zeitgeist is found in the origins of the exhibited artists. The collection presents a vast plurality of mediums, but the cultural backgrounds of the artists themselves are as diverse as their works. A visit to the L.V. Foundation is a visit where one gets a glimpse at the way cultures shape an individual’s imagination. This, in itself, adds an essential level of diversity to the collection. Indeed, this cultural diversity was intended and desired as opposed to being the product of a long series of age-old cultural appropriations which is an important distinction to make. Foreign art is often discriminated against, treated as if it were a different, unperfected language, born in a lesser culture. In this institution, although far from perfect, the works of art are presented as a language that all may understand if they would only lend an ear. Art is the closest we have to feel to one another. Indeed, when beholding the Louis Vuitton foundation’s collection one cannot help but feel that the sheer, unhindered variety of the exhibit is a statement in itself. And what better way to send a message?

Whether one enjoys art as an intellectual exercise or as an opportunity to contemplate aesthetic prowesses for its amazing architecture, for the convention-breaking works that it harbours and for the stance it takes on diversity, the Louis Vuitton Foundation is a token of celebration for contemporary art to be reckoned with.