THE IMPORTANCE OF NOTHING

In the State Tretyakov Gallery in Moscow there hangs a painting that occupies little space on the wall. It does not lure its viewers in with lush colours or cry out for attention like sirens at sea. It hangs inconspicuously, blending into the bleak tones of nighttime. It is not dreamy like Van Gogh’s Starry Night or tender like The Kiss by Gustav Klimt, but it holds up strong against the viewer’s gaze, challenging those who dare doubt its importance.

A black square surrounded by a border of white. Appropriately named Black Square, Kazimir Malevich’s painting is easy to disregard at first glance. It looks brash and unfinished; An art piece that’s effortless to replicate. But there is more than meets the eye to this aged and peeling painting. Believe it or not, this black square was revolutionary.
‍ 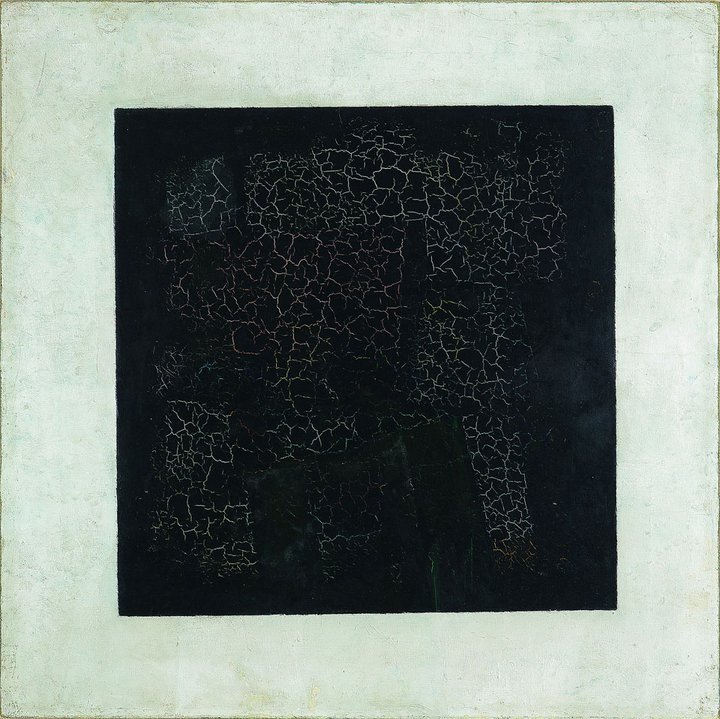 Black Square first appeared in 1915 at an exhibition in Petrograd called The Last Futurist Exhibition of Paintings 0.10. The piece was showcased up high where the wall connects to the ceiling, a space referred to as ‘the beautiful corner’ in Russia. This spot is reserved for displaying religious icons and some viewed this as a hateful act, while others believed it was intended to unify the audience regardless of their beliefs. Many people also raised the question of whether Black Square should even be considered art. It was the first painting of ‘nothing’ to ever be showcased and it seemed as though the piece had no meaning.

By only utilizing one simple shape the art was stripped to its core, or the ‘zero degree’ as Malevich put it. Scenes from the objective world were eliminated completely so that emotions could reign supreme over subject matter. This concept was heavily influenced by a group of literary critics known as the Russian Formalists who theorized that language is not a straight path between a word and an object. Words hold more significance than the items they are linked to and when you eliminate them, nuances of the word shine through. Malevich tried to represent this idea by featuring geometric forms not connected to any ‘subject’.

Once you stop trying to determine symbolism and simply take the painting at face value, you allow emotion to overpower reason. Staring into the desolate, black shape you may feel intimidated, uncomfortable, or even frustrated that a painting devoid of technique is so acclaimed and revered. Regardless of your reaction, the fact that paint on canvas made you feel any of these things is powerful and speaks volumes to the importance of the piece.

However, the controversy surrounding this painting goes one layer deeper.  In 2015, researchers at the Tretyakov Gallery performed an x-ray and discovered not one, but two paintings hidden behind the veil of black paint. The first is a Cubo-Futurist style painting and the one directly underneath the piece we see today is in a proto-Suprematist style that offers a glimpse into the process of Black Square being created.

The x-ray also exposed a note left by the artist underneath the white border of the painting. It was challenging to decipher but the inscription was revealed to say, “Negroes battling in a cave”. This was an alarming discovery.

In the 1880s, French artist Alphonse Allais released a series of satirical paintings as an ‘April Foolish Album’. The series featured single-coloured rectangles with captions underneath. Some examples include a white square with the caption “First Communion of Anemic Young Girls in the Snow” and a black square titled “Negroes Fighting in a Tunnel by Night”. The correlation between Allais’ series and Malevich’s inscription is hard to deny. The similarities have brought forth many questions.

It’s disappointing to think that the very beginning of abstract art could have been a response to an offensive, satirical painting. Malevich conveyed great pride in his work and believed his creations were meaningful to the art world and society at large, so why would he sully its importance with a racist caption? Did he write the inscription to reference Allais’ work but then acted as though it was entirely his own invention? Did he write the hidden message as a crude joke to himself, making light of the painting he described as profound and revolutionary? While the caption is no laughing matter, Allais’ original piece was intended to be humorous. As terrible as it is, Malevich may have interpreted it that way. 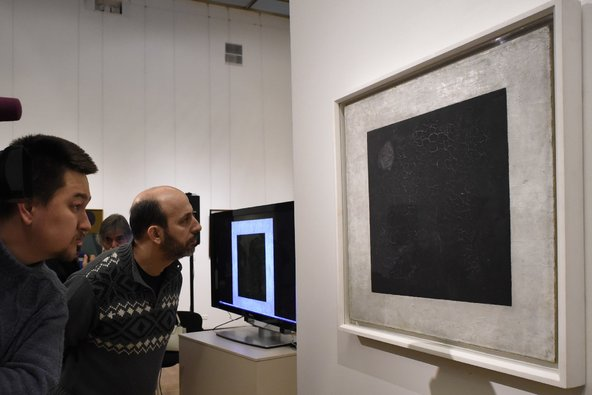 Answering the riddle of Malevich’s intent is no simple feat. Malevich produced many writings during his lifetime, but the pieces are not concrete and serve more as poems that are open to interpretation. He lived a nomadic childhood and was constantly reimagined by his ever changing surroundings. With no place, language and customs to claim as his own, Malevich, much like Black Square, had no set identity and his motivations and beliefs are subject to much speculation.

It is fair to suggest that he did not write these words out of malice and never could have predicted the uproar it would cause. He was not a hateful man, but rather, the racism was so embedded in his everyday beliefs that he could not even distinguish it for himself. However, this does not serve as an excuse for the callous message he left behind his most famous work.

Its deeply disturbing that even a painting of nothing can still hold hatred at its core. Racism is so deeply woven into the world of art that looking closer and pulling back a layer of paint can reveal harmful intentions. As we become more aware of this, we must learn from the ignorance of the past. We cannot disregard this painting and pretend it does not exist to comfort us and diminish the issue at hand. We must acknowledge Black Square and its importance as well as the offensive inscription hidden within.

When Black Square debuted, it taught us to observe our surroundings in a new way. The lesson it teaches now is even more pertinent. This revolutionary painting shows us that it is time for a new, informed and inclusive revolution to overtake the world of art.